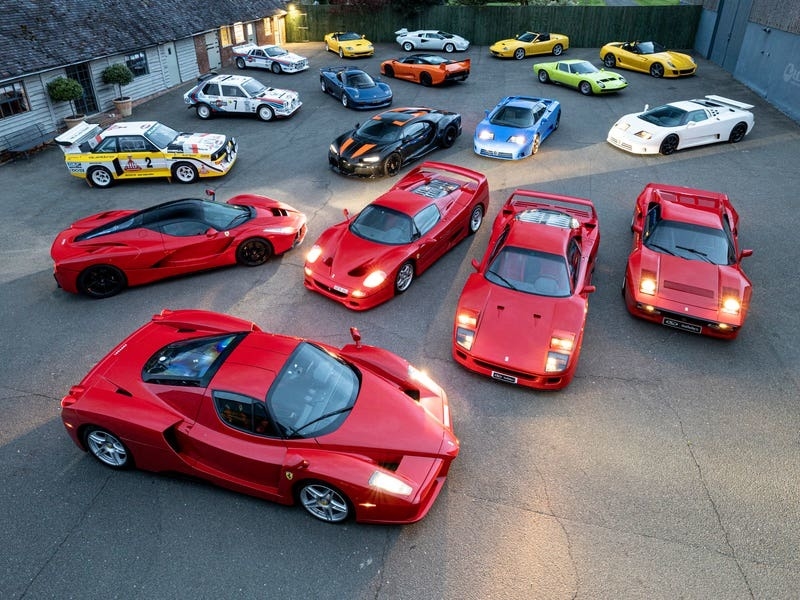 A supercar collector is auctioning off 18 of their cars, including eight Ferraris and three Bugattis, at an auction in London next month.

Described as ‘one of the most remarkable single-owner collections of supercars to be offered in Europe’, the group of cars stem from a 50-year section of automotive history and is being sold by RM Sotheby’s.

These range from the oldest car in the collection – a 1971 Lamborghini Miura SV – to the newest, a 2022 Bugatti Chiron Super Sport 300+. This latter vehicle is one of just 30 cars ever made to celebrate the hypercar’s incredible top speed of 304mph. With an estimate of £4m-4.5m, it’s also got the highest estimate of any model in the auction.

Legendary Group R rally cars also play a part in the Gran Turismo Collection auction, with some particularly important models being sold off. These include a 1986 Lancia Delta S4 Group B, complete in Martini livery, which won the 1986 Monte Carlo rally, and is accompanied by an estimate of £1.75m-£2.25m.

Presuming all cars meet their lower estimate, the combined value of these 18 models is an astonishing £29.7m.

Michael Squire, a senior car specialist and director of research at RM Sotheby’s, said: “This is certainly one of the most remarkable single-owner collections of supercars to be offered in Europe.

“It represents a cross section of supercars and GTs which are at the zenith of desirability in today’s market. The Group B rally cars are an additional, remarkable highlight, perfectly encapsulating the peak of rallying’s most extreme era.”

All 18 cars are being auctioned by RM Sotheby’s London sale on November 5.

The post Eighteen supercars all owned by the same person up for auction appeared first on Jersey Evening Post.