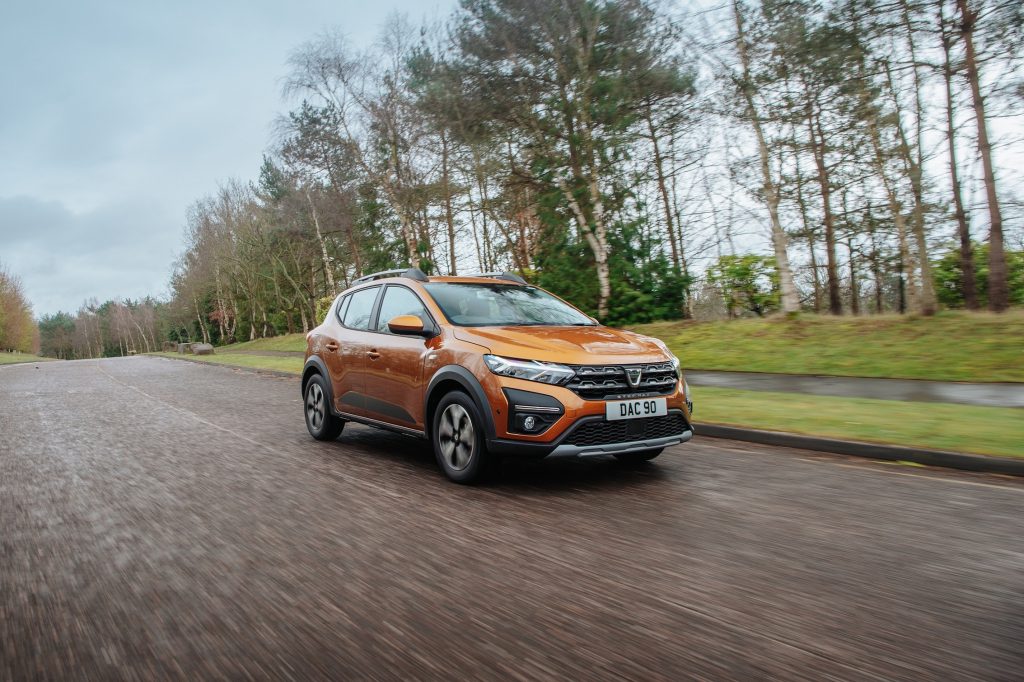 The rise of SUVs and crossovers is well-documented, and their popularity has taken off to the point many manufacturers have introduced more ‘rugged’ versions of their regular cars. It’s been with mixed results, though – Audi’s high-riding A1 Citycarver proving to be a sales flop and Vauxhall quietly dropping its faux off-road ‘Rocks’ models.

The same can’t be said for Dacia, though, which has seen its chunkier ‘Stepway’ models outsell its regular variants – accounting for 60 per cent of overall Sandero sales. And with this budget supermini now back for a new generation, should buyers continue to opt for the Stepway version? We’re finding out.

Dacia has moved the Sandero forward in just about every area – quality, safety, technology – we could go on. Much of that has been allowed by Renault’s latest CMF platform, as used on the parent French firm’s latest Clio and Captur.

The Stepway version also goes on sale at the same time as the standard car, and is noticeably different to look at thanks to its raised ride height, unique grille and thick plastic cladding. The roof rails are also included and are particularly clever, as they double up as roof bars – saving you the hassle of having to attach them separately.

What’s under
the bonnet?

Though the regular Sandero gets a cheap and less powerful naturally-aspirated engine, the Stepway just comes with the more powerful options, with buyers able to choose between the TCe 90 and TCe 100 Bi-Fuel. Both feature a turbocharged 1.0-litre petrol engine, with the latter option able to run on both petrol or LPG, which helps to reduce running costs.

Here we’re trying the TCe 90, which is also available with an automatic for the first time, along with the six-speed manual in our test car. It kicks out 89bhp and 160Nm of torque, which allows the Stepway to reach 60mph in 11.8 seconds and hit a top speed of 108mph.

It’s good on fuel, too, with Dacia claiming 50.4mpg – a figure we found to be easily achievable on our test route – along with CO2 emissions of 127g/km.

The Sandero will never be a car bought for its thrills, but it’s now a far more well-rounded option compared to its predecessor – feeling more refined and involving than before, and not anywhere near as cheap as its price suggests.

It’s the comfort that impresses here, though, with a soft and compliant ride that deals with Britain’s potholed roads well, while the raised ride height helps to give you a better view of the road ahead, building on the strong visibility already offered by the regular Sandero.

The engine is a good match, too, never feeling especially quick, but providing enough pace for most users, with a sixth gear aiding its usability at higher speeds.

How does it look?

Though chunkier SUV-like styling will always divide opinion, we reckon on the Stepway it certainly helps to bring a bit more style to this hatchback – the standard Sandero being quite bland to look at, if we’re being critical.

It feels a more convincing effort than just slapping plastic trim on a regular car, too, with the Stepway getting its own model-specific grille and bumpers, along with the aforementioned roof bars and new 16-inch alloy wheels (fitted to top-spec Prestige versions). The bright Desert Orange colour pictured is exclusive to this rugged trim, too, and is an option box we’d happily tick.

Previously, the Sandero’s biggest weakness was always its interior – feeling and looking just as cheap as its price suggested. But this latest car’s cabin is a huge step forward, with all but the entry-level car being equipped with a large eight-inch touchscreen, which is surprisingly slick to use, while the quality of the cabin is lifted throughout. Granted, there are cheaper materials still on show, but they’re disguised well. Stepway versions also feature plenty of orange detailing, and come with smarter climate control settings than the regular car.

Despite retaining similar dimensions to before, this Sandero is also roomier, with additional legroom giving it class-leading rear space that’s plentiful even for adults. The 328-litre boot is a good size for a car of this class, too.

The mid-spec Comfort then brings an eight-inch touchscreen with satellite navigation and smartphone mirroring, along with keyless entry and a reversing camera. At the top of the range, the Prestige (which is exclusive to the Stepway) adds 16-inch diamond-cut alloy wheels, front parking sensors and climate control.

With the Stepway being seen as the more upmarket Sandero, it misses out on the headline-grabbing £7,995 starting price of the regular car. That said, given it’s available from £11,495 still makes it terrifically affordable, undercutting the cheapest Ford Fiesta and Vauxhall Corsa by a few thousand pounds. While top-spec versions tip the scales at nearly £14,000, it still represents astonishing value.

If you’re comparing it to the standard Sandero, expect to pay £1,500 for a like-for-like Stepway.

Though the Stepway might be more expensive than the standard car, what it brings in style certainly makes up for that, and it’s quite easy to see why it sells better than the regular Sandero.

With a roomier interior, higher-quality cabin and much-improved road dynamics, this Sandero Stepway is more appealing than ever. Consider the affordable pricing, which undercuts rivals, and this is easily one of the best small cars on sale today